Today the world recognizes developer advocates, evangelists and everybody else on the “DevRel” team. 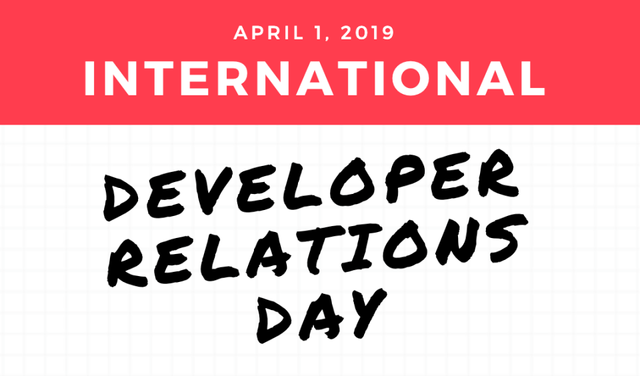 San Francisco, CA, April. 1, 2019 — Today the world recognizes developer advocates, evangelists and everybody else on the “DevRel” team no matter what crazy title they have.

What is developer relations? The most widely recognized definition comes from the movie Gladiator (2000):

“There was a dream that was DevRel. You could only whisper it. Anything more than a whisper and it would vanish, it was so fragile.”

Over 3 billion developers have gathered at meetups, conferences and hackathons around the world to cheer on their favorite advocates, and then to ask them support questions.

Several major airlines have partnered to give DevRels free first-class upgrades today as they fly to and from their speaking engagements, homes and offices. You didn’t think they’d get the day off, did you?

This elicited an enormously positive response from developer relations practitioners worldwide, who instantly closed files like ATTENDEES_COUNT.xls and CONFERENCE_QUALIFIED_LEADS.csv, then shut their laptops and took the elevator down to the lobby bar to celebrate.

Several developer advocates were contacted for this story but curiously all of them responded with the same message: Out Of Office: Traveling.

One advocate did reply a few minutes later and apologized, admitting that she was not actually traveling this week but just needed to go one consecutive 24-hour period this year without talking to anyone.

Teammates from marketing, sales, engineering, business development, product, customer success, human resources and operations came together to celebrate their company’s DevRels today, whom they work with on a regular basis. This turned out to be an effective team-building activity as most of those people had never met before.

If you’re on the product or engineering team, please assume that the feedback gathered by your DevRels from the community is, in fact, valid feedback.

If you’re on the marketing team, consider taking 90 minutes next week to explain how the navigation inside of Google Analytics works.

If you’re in sales, it’s easy, just batch up your introduction requests instead of making them one at a time, and under no circumstances ever send a whitepaper to a developer.

If you’re a designer or developer that uses the service that your friendly neighborhood DevRel works for, consider holding off on that request for 400% more free quota until you actually hit your limits. Maybe also pay their company money someday.

If you are a conference lanyard, please stop twisting around and facing the wrong way.

If you follow a DevRel on twitter, please do not reply to their tweets with “Hot Take” or “Unpopular Opinion”. Avoid doing that today and also for the rest of your life, which will be longer.

If you’re a manager of a DevRel individual or team, please add an emoji to the calendar invite for your 1:1 meetings, preferably 🤗 or 🙏.

How should you celebrate International Developer Relations Day if you yourself are a DevRel?

Developer Advocate Jessica West recommends that you “Go purchase mini bottles of wine and visit a high rise to pretend like you’re on a plane”.

Director of Developer Relations Justin Johnson encourages advocates to “Take that money you were going to spend on another .dev domain and buy a plate of tacos instead.”

The team at Orbit hopes you’ll take today to think about what you need in order to be happy and successful.

Sleep. A lot. Take breaks. Tweet or don’t tweet. Sprawl when you’re in the airport lounge—that’s what those jumbo 1-person couches are for. Don’t burn out - burn in. Be proud, but stay humble. Don’t drop the mic after your talk no matter how loud the audience is clapping. Microphones are expensive and you won’t get invited back next year if you break one.

Home Product Blog About Us Help