Somehow it’s already June (late June!), which has the team here at Orbit feeling at once reflective about the year thus far and energized by what’s to come.

It’s been a tough first half for everyone, including the Orbit team. In the midst of the chaos, we’ve tried to focus on building our community, and to continue creating tools for all the other community builders.

In the past few months, we’ve released a GitHub integration, an API, a Chrome extension, and today, a Twitter integration.

These data sources serve as the backbone of the Orbit community experience platform, which helps teams deliver a great experience to their community members while proving the ROI of their efforts.

In this post, we’ll share a few updates on the tools we’re building, and how our community is using them to build relationships and grow their own communities.

First, a refresher on Orbit

In case you haven’t been following along, here are some of our favorite things about Orbit.

Your whole community, in one place

Import community members and their activity from any source, using our GitHub and Twitter integrations, our Chrome extension, directly via the web UI, or using the API.

Orbit’s Highlights feed shows you who’s contributing the most, as well as new high reach folks, to help you connect with the right people at the right time. The Reports page shows the most active members of various timeframes, which Orbit also emails weekly as part of a regular community update. 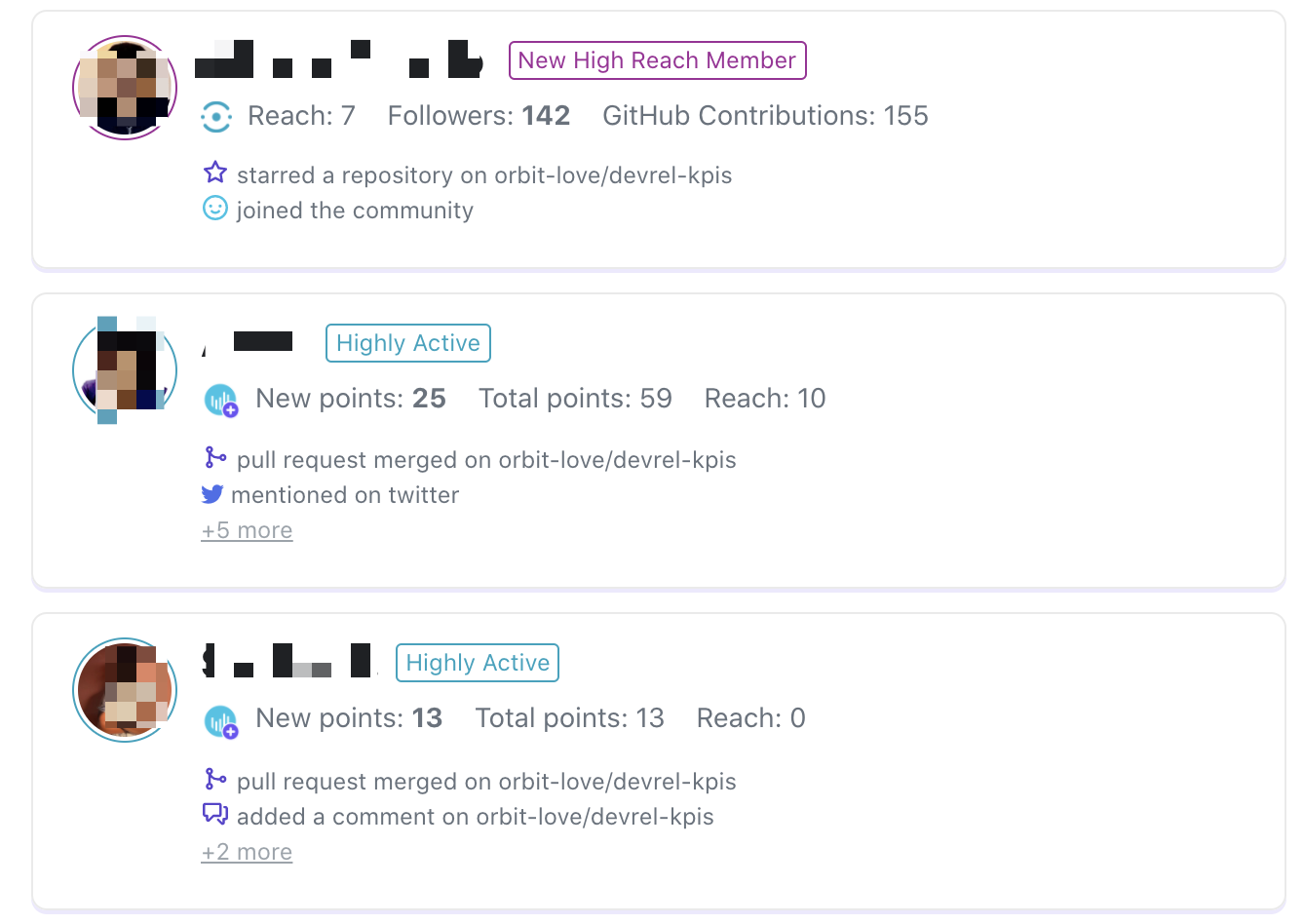 Stay in sync with GitHub

Community happens in lots of places, but for many of our early users, GitHub is a big part of their community story. That’s why we’ve invested in strengthening our GitHub integration over the past few months.

With just a couple clicks (and read-only permission), Orbit automatically creates profiles for all your contributors, as well as a timeline detailing all the activity across your repos.

You can search and filter for people and activities by repo, and see reports about activity overall, along with a list of your most active and most influential members.

Single view of the community member

The Member profile page incorporates several kinds of information to provide you with the full context of the person you’re working with. First, Orbit automatically populates background info from various sources, like bio, company, location, and more.

Then, for members who have a GitHub handle, Orbit creates a list of their top languages and topics, as well as their commit history across GitHub. It also lists any GitHub activity in your own repos.

The member Timeline displays all the interactions your team has had with the member, along with relevant content created by that member and notes you and your team have added. The timeline includes: 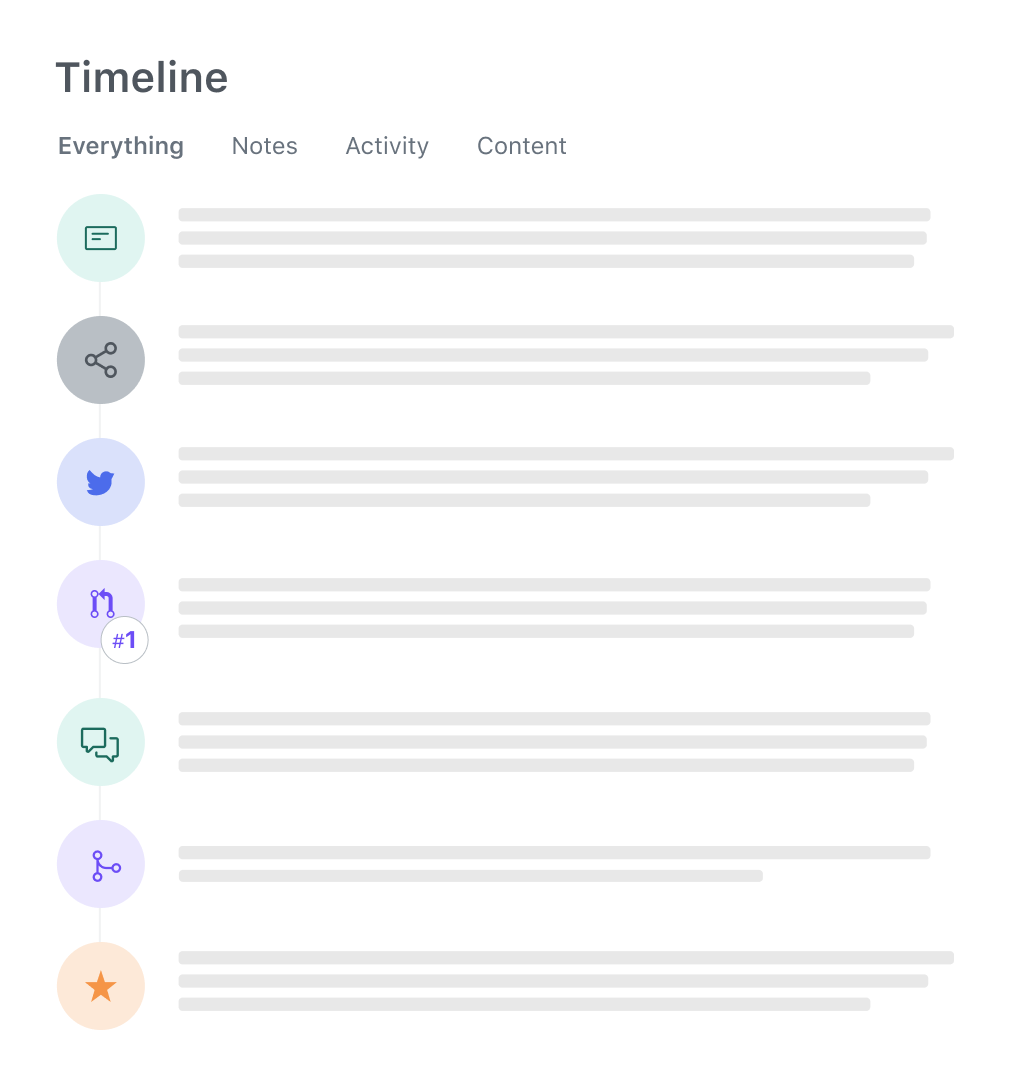 Finally, Orbit let’s you save important community-centric info about a member, like their t-shirt size and preferred pronouns.

With that background in mind, here are the things we’re excited about right now.

With the Twitter integration, Orbit automatically saves relevant tweets to your workspace, and creates a member profile for the person who sent the tweet. The tweet appears on your global Activity timeline as well, so your whole team can follow along with the conversation. 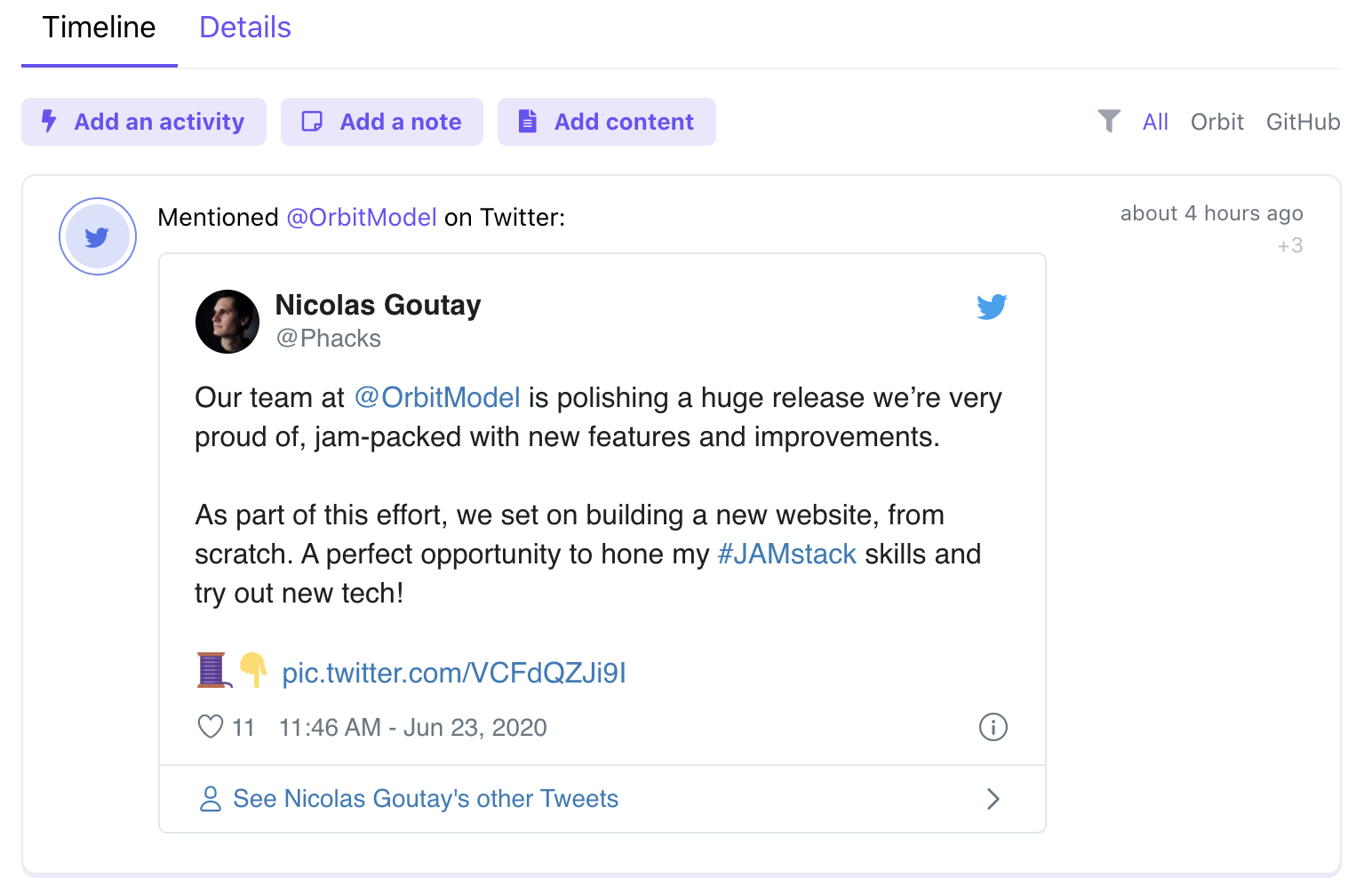 🧰 How we use Orbit daily

I’ll admit it: I keep too many tabs open. In the course of a day, I spend time on customer support, community interactions across several sites, including Twitter, GitHub, DEV and spreadsheets—so many spreadsheets. That’s in addition to communicating with potential customers and partners, and keeping investors in the loop.

My old workflow involved keeping eight or ten tabs open at once to manage all these different touchpoints. But lately, I’ve been using Orbit to stay on top of more and more of our community interactions.

And we’re not the only one closing our spreadsheet tabs:

We think the new site is pretty and informative, but it’s also blazing fast thanks to the technical choices we made during development. It’s a fully static site powered by lots of great open source projects, including Eleventy, Sanity, Tailwind, Alpine, and Vercel.

Checkout this thread for more details about the site’s performance choices.

⚡ You've been hacking on the Orbit API

We believe that flexibility is central to building a community experience platform, so we’ve focused on providing an API to connect most any service to Orbit.

Our early users are DevRel and community managers who are all quite technical, so we’ve been excited to see what you’d build with our API. We maintain a Slack group called Orbit One where early users and fans hangout and share ideas.

They’ve been kind enough to share what they've been up to.

For one, Sébastien at NuxtJS built an integration that watches Twitter for certain brand-related hashtags, and adds the tweets and the tweeter to Orbit.

Ari at Embark Studios uses Orbit to provide an overview of their 20+ GitHub repos and to highlight contributors who are highly engaged across their ecosystem.

As a pre-release platform, this helps us identify awesome potential ambassadors for feedback and early access. With the API, we’ve also been able to connect Orbit to our Mailchimp newsletter, and are looking to connect more of our activities, like event signups, Twitter engagement, and (eventually) early API access.

David at QuestDB uses the API to track new GitHub stargazers and to add new members of the Slack community to Orbit.

We know this is just the beginning of what’s possible, and we can’t wait to see what the community builds next.

As you can see, it’s been a busy 2020 so far, but we’re not slowing down. If you’d like to try Orbit for your community, signup for early access.