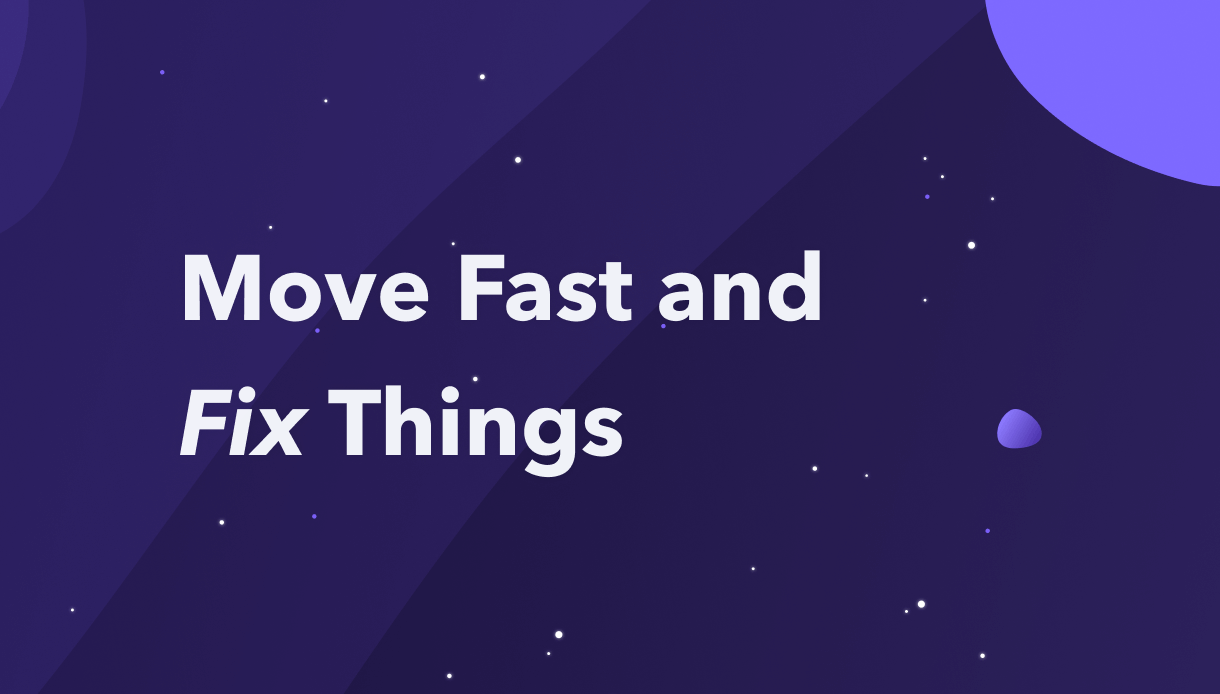 Move fast and fix things is one of our mottos here at Orbit 🚀. As a co-founder & CTO, I find it helpful for aligning the team and making decisions where there’s no single right answer.

The motto brings to light tensions that exist in every startup—the relationship between stability and change, between strengthening what exists and building something new, between continuity and creativity. Existential tensions like this shouldn’t be as problems to be solved, but situations to be negotiated, day in and day out.

Today I’ll introduce you to polarity management, a framework that I use to identify and manage these unsolvable problems at Orbit. I was introduced to it last year by my coach Nadine. Polarities have two right answers that are interdependent. They can be managed well or managed poorly, leading to positive or negative outcomes.

Our motto may sound familiar. In the early days, Facebook’s motto was move fast and break things. It’s a good motto to inspire action but lacks a counterbalance. If we keep moving fast, we’ll keep breaking things, and eventually we won’t be able to move fast anymore. Then what? The motto only tells half of the story. Facebook themselves changed it in 2019 to move fast with stable infrastructure. Not as catchy but probably more useful.

Why is learning to manage polarities important? In organizations, they are everywhere.

Top-down and bottom-up
Top-down guarantees alignment but can stifle creativity and innovation. Bottom-up grants agency to employees but can lead to chaos without direction. Both are needed.

Freedom and responsibility
People want the freedom to do what they think is right without going through layers of approval. Yet they must also own the consequences of their actions.

Profit and purpose
Most organizations don’t want to only turn a profit OR make the world a better place. They want to do both.

Each of the polarities, and many more, must be managed day in and day out. Great companies do this well. Their cultures evolve to handle these interdependencies, benefitting from the positive characteristics and limiting the negatives.

An introduction to polarity management

All you need to start understanding the ideas of polarity management is a simple quadrant diagram. Throughout this section, we’ll use the 2 poles of stability and change as the example.

In our quadrant diagram, stability is on the left and change is on the right. In the corners of each quadrant are L+, L-, R+, and R-. The L and R stand for left and right. The + and - indicate the upsides and downsides of each pole.

This is called a polarity map. In our example, stability is the left pole and change is the right pole. The next step is filling out the information in each quadrant.

I’ve started by filling out the stability side below.

In an organization, some upsides of stability are rested employees, customer trust, and the ability to build up institutional knowledge. The downsides of too much stability include getting too comfortable and failing to adapt to changes in the market. Next, let’s look at change. I’ve populated the quadrants on the right.

The upsides of change are things like rapid innovation, a fast pace of learning, and the ability to be first in a new market. The downsides of too much change are a loss of trust, more mistakes, tired employees, and a lack of alignment.

So far, this exercise has helped us get a handle on stability vs. change by plotting out at the upsides and downsides of each pole. This is the structure of the polarity.

The next question becomes - how can an organization get the best of both upsides without surrendering to the downsides? To answer that, we need to look at movement between the poles—the dynamics of the polarity.

Imagine a startup that just raised a big round of money after a very successful product launch. The team worked super hard on the launch and has been rewarded with money in the bank and a meaningful runway for the first time. A few months have passed and the mood is positive, but the CEO has noticed some signs that are starting to concern her.

The product roadmap is mostly bug fixes and small features, due to a consensus of being far ahead of the competition. Meetings have gotten longer and there are more of them; people aren’t guarding their time as closely as before. A quiet atmosphere of politics has arisen as employees start to think about promotions and securing the optimal position for themselves and their team or department long-term. The energy in the room has shifted from that of a feisty underdog to a smug incumbent.

The CEO knows that the competition is determined to catch up and that runway is not infinite. What can be done?

From stability to change

Our hypothetical startup has found themselves in the bottom left-hand quadrant: the downside of too much stability. It’s natural that would come after a successful launch and fundraise, but it’s dangerous if it continues for too long.

The next move is across and up.

A burst of energy and innovation is needed, which is exactly what the top-right quadrant has waiting. The company’s CEO and leadership must think about how to inject a new dose of ambition, speed, and risk-taking into the culture.

From change to stability

Fast-forward six months. The company has doubled in size, launched a second product, and is starting to attract many new types of customers. There just aren’t enough hours in the day. Support is overwhelmed, the engineers have a backlog of bug fixes, and the leadership team is concerned that alignment is degrading. Everyone has a different interpretation of what’s happened recently and there hasn’t been time to compare notes. It feels like surfing on the edge of chaos.

It’s time to move across and up again, but in the opposite direction. What the startup needs now is a moment of grounding, stabilizing, and foundation-building. A time of creating alignment and restoring trust in the places it has been frayed.

After a long enough period of stabilization, the hypothetical startup will drop from the top-left to bottom-left quadrants, feel the need to move across and up, and the cycle will repeat itself again. This is a continuous process. If you trace the direction of the arrows with your finger, it makes the infinity loop ∞.

Here’s a diagram that pulls it all together:

The job of a leader is to identify polarities and manage them effectively. In a well-managed polarity, most of the time is spent reaping the benefits of the upsides of either pole. Less time is spent experiencing the downsides.

To make it more concrete, I recommend getting out a pencil and paper and drawing a map for a polarity that you or your organization is dealing with at the moment.

Prefer to do it electronically? I’ve created a Miro board for polarity mapping that you can copy and use.

For the original work on the topic of polarity management, check out Polarity Management: Identifying and Managing Unsolvable Problems by Barry Johnson. Barry created the first polarity map in 1975 and has been working on these ideas for almost 50 years. 🤯 For a video introduction, check out Polarity Coaching on Youtube.

Do you have an example of how your company identifies or manages polarities? I’d love to hear about it. Send me a note on twitter at @dzello.