An overview of recent community-driven changes to the Orbit Model.

18 months ago we published the first blog post about the Orbit Model. That blog post has evolved into a repository on GitHub, an application, and a full-blown company.

Given all the progress, we thought we’d share an update on where things are with the Orbit Model – a state of the solar system, if you will.

In this post, we’ll discuss the recent Orbit Model RFC, how the Orbit application helps users use the model, and hear stories about how the Orbit community is applying the model to their own communities.

In late July, Josh published a Request for Comments (RFC) on the Orbit Model repository to seek community input on several proposed changes. The updates sought to simplify parts of the model, introduce the notion of community drift, and help it to scale to other community types.

Additionally, after managing our own community with Orbit for several months, we were able to observe how the model worked. With those learnings in mind, we wanted to make sure the Model accurately reflects the ways communities grow and contract.

The RFC focused on two concepts: the Love calculation and its impact on Orbit Levels, and the names of the Orbit Levels.

During the course of the RFC, the community weighed in with more than a dozen thoughtful comments. For one, Laura Santamaria shared that the recency of a community member’s contribution is important, but so is the relative impact of that contribution, “kinda like how a tiny comet hurtling through a star system may appear and disappear very suddenly, making very little impact on the overall orbit of anything nearby, but a large comet on the same orbit could potentially impact the other orbits.”

Simme and Zan built on that input, and helped us land on the concept of weights, which are now incorporated into the main Orbit Model docs.

Zan, along with Erlend, also helped refine the thinking around using Love to determine Orbit Level.

You can read the full RFC here.

Key changes include updated names for each Orbit Level, simplification of activity scoring, and a revised formula for Love that now includes time.

We’re in the process of updating the main README to reflect the updated thinking. As always, please open an issue or PR to share any potential clarifications or improvements.

The names of the Orbit Levels are very important to the Orbit Model. They give us a common vocabulary to describe where members are at in their journey and what category their Love falls into.

Orbit Levels get used in conversation all the time, not just with community folks but also with leadership and people in other teams, so the level names need to be accessible enough that even those who aren’t familiar with the Orbit Model can understand them. The names need to be specific enough to have meaning, but generic enough to work for most communities—not just developer and product-centric communities, but all communities. This was a big motivation for the change.

This is what we’ve landed on:

The level names reflect first and foremost the increases in a member’s love or engagement. An Observer is aware but watching from the sidelines, a Participant has started sharing or attending events, a Contributor has started to tackle community needs, and an Advocate has progressed toward a contribution of evangelizing and recruiting for the community.

We understand that words like “Contributor” already have a specific meaning in certain contexts, a meaning that’s not just a function of Love but of specific types of activities a member does (pushing code or submitting a pull request, for example).

Our hope is that these collisions cause less confusion than the value of the simplicity they bring. But we also encourage any community to change the names of the Orbit Levels to suit their needs. It’s still easy to fall back to the numbers — Orbit 1, Orbit 2, etc. — to compare different communities that may have chosen different Orbit Level names.

While it’s possible to apply the model by hand or in spreadsheets—we created a sample Airtable template for this purpose—the Orbit application will keep up with your members and their activities for you, and generate Orbit Model metrics like Love, Reach, and Orbit Level.

You can also see the history of member’s love via their love line (above) or their heatmap below:

At the community level, Orbit summarizes the change in Orbit Levels and Love over time. 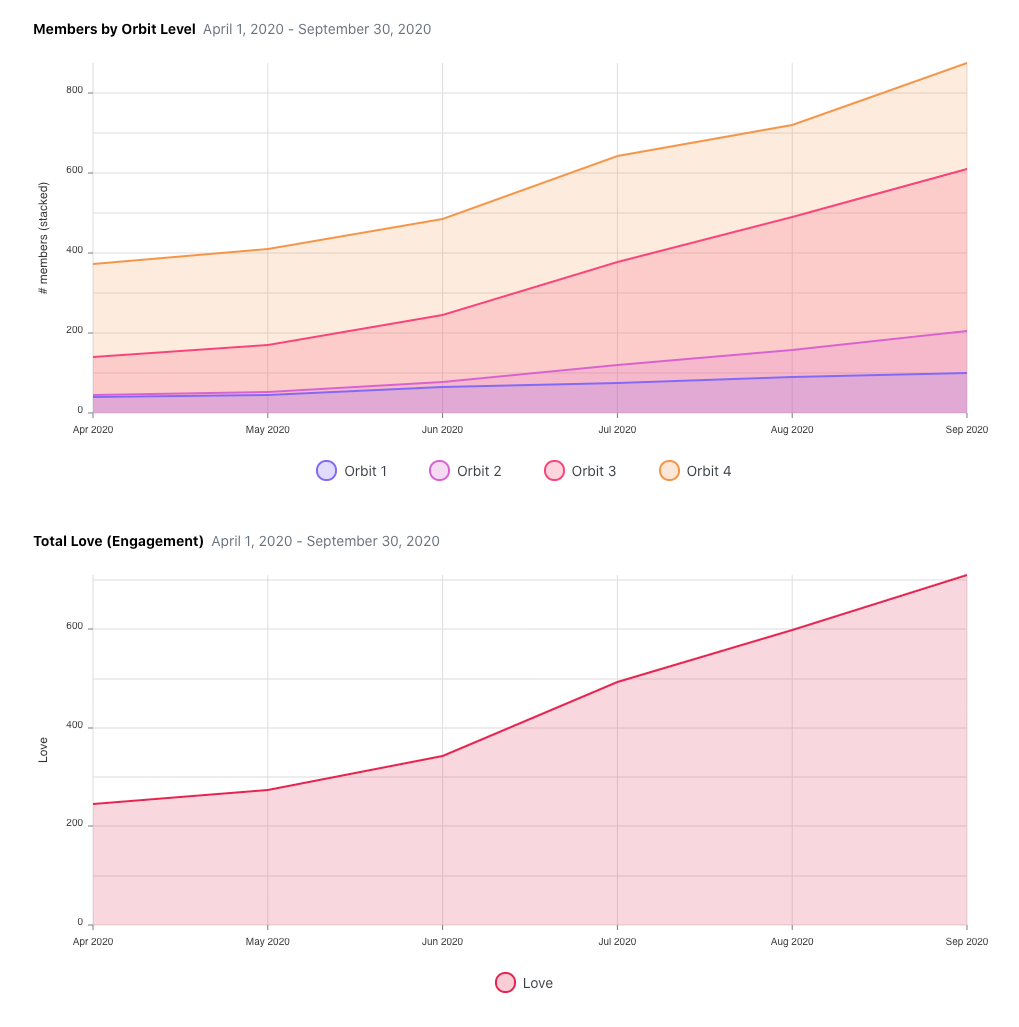 Using data from integrations and our API, Orbit handles the calculations and creates these charts automatically, allowing our users to see the impact of their community building efforts over time.

The Orbit Model in the Community

Community members have been speaking up about how they’re using the Orbit Model for their own communities. 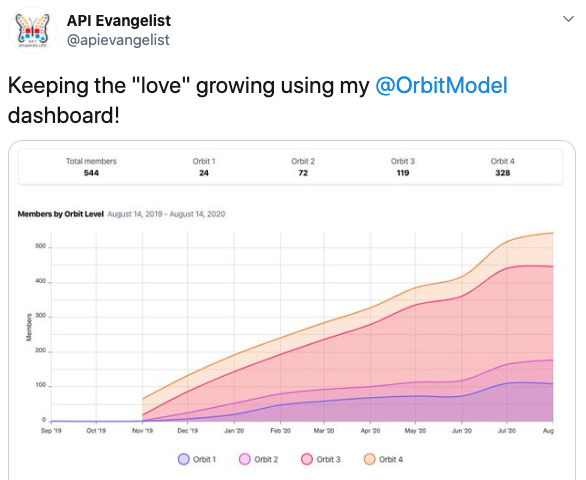 Kin’s tweet got us wondering how others are applying to model, so we asked a few community members to share. Kin’s colleague, Director of Developer Relations Joyce Lin, says:

"The Orbit Model is helpful for professionals in Developer Relations, as well as surrounding functions who traditionally focus on a sales funnel. The model conceptually and visually captures the value behind community interactions, and quantifies that for people who may not get to engage on the front lines. Seems simple. But it gives even seasoned veterans food for thought and keeps them honest on where to invest their time."

Laura Santamaria from LogDNA is using the Orbit Model to explain her team’s impact and to help prioritize their efforts:

"We're building a community model from the ground up based on Orbit as we found it had the most accurate mental model of how communities function. The Orbit Model is helping us understand how impactful our actions can be so we can prioritize actions over time.

In short, Orbit is helping us explain how to scale a small team to engage with a large community on an authentic level to leaders who are looking for some metric related to value over time."

"Orbit is helping us quantify and stay on top of our growing developer community. It’s a great way to see how our community team’s efforts directly affect the community, and especially how they bring community members into “closer orbits” as they become more engaged. The Orbit Model itself is easy to understand and explain to non-community teams in the company as well!

"Our open source maintainers also use Orbit to get an overview of their projects and see new contributors. We recently launched a Discord and were easily able to invite all our Orbit 1 contributors and give them a special role in the server."

How to get involved

The Orbit Model movement is just getting started, and we need your help to strengthen and refine the model and how it’s used.

If you have ideas for ways to improve the Orbit Model docs on GitHub, please open an Issue or PR to share your thoughts.

Finally, if you have other feedback or ideas, send a note to community at orbit.love — we’d love to hear from you!