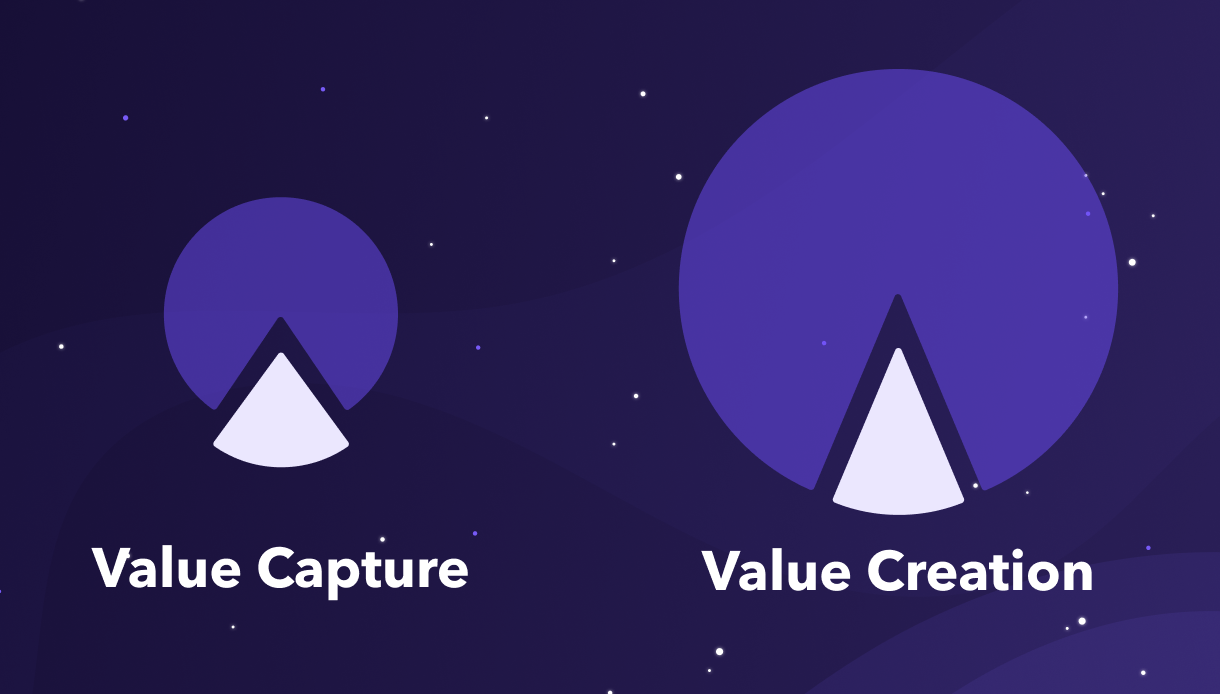 The traditional sales and marketing funnel is about extracting value, optimizing each step of the process around that. And that’s okay, of course — value capture, i.e. making money, is essential to the survival of a business.

But companies that win also invest heavily in value creation, both in terms of their product, but also in the ways they interact with their community and potential customers.

🚨 Before you read on, I should warn you that I’m only talking to folks who are interested in building long-term relationships and long-term businesses. The benefits of value creation, like a flywheel, accrue over time. So if you’re looking for a quick buck, feel free to stop here.

Value creation exercises include many of the activities carried out by community teams, developer advocates, content creators, and event organizers. This includes creating content and tutorials, developing training materials, hosting events, and creating spaces where people can share ideas and connect with one another.

Value capture is about generating pipeline and qualifying and closing prospects. These are your demand generation experts, SDRs, SEs, and AEs who are generally aligned and compensated on, capturing value.

Today, the teams described above usually span marketing and sales organizations, which can lead to interesting and sometimes confusing conversations. Hosting a mixer for the community is pretty different from optimizing a conversion funnel or writing copy for a paid search campaign, yet individuals doing these jobs often sit in the same organization.

As a result, it can be really hard to define success when everyone harbors differing underlying assumptions about what’s at stake. This leads to a mismatch between activities and their expected impact.

For example, you wouldn’t typically ask an SDR to write a tutorial or hangout in the community Slack channel. They’re solely focused on lead qualification, and more generally, capturing value.

At the same time, it’s not uncommon for someone to ask a community manager or a developer advocate something like, “How many leads did we get from the meetup last night?”

The person in this example is asking a value capture question about a value creation activity.

It’s less a matter of the functional reporting structure, and more a question of which people are working on what outcomes. As a simple next step, consider talking with your teams about where their efforts fall — are they working on creating value, or capturing it?

From what we’ve seen, most companies never have this ☝️ discussion, so simply introducing this vocabulary will help bring clarity to your efforts.

But who cares? Shouldn’t every function in a business focus on capturing value?

Value creation as a positive-sum game

The Edge Question for 2011 was “What scientific concept would improve everybody's cognitive toolkit?” Steven Pinker’s response was Positive-Sum Games. To understand sum games, let’s first look at their opposite: zero-sum games.

A zero-sum game is one where your win means I lose. This includes sports as well as competition for scarce resources, like oil, or more abstract concepts like social status. There’s not enough of the spoils for the both of us, so I’ll do whatever it takes to get my share (which means you don’t get any, or you get less).

A positive-sum game on the other hand is one that provides a net gain for everyone involved. “More colloquially, positive-sum games are called win-win situations, and are captured in the cliché ‘Everybody wins.’” (John Brockman) It’s making the pie bigger for everyone.

Over time, organisms and societies gravitate to a positive-sum orientation for the benefit of all. Pinker points out that since 1950, global trade and cooperation greatly increased while things like power wars decreased. These benefits “started to accrue to the developing world as well, in part because they have switched their foundational ideologies from ones that glorify zero-sum class and national struggle to ones that glorify positive-sum market cooperation.”

On a more micro scale, I think the relationship between companies and customers is following the trend toward a positive-sum relationship as well.

Often, a funnel-centric sales process, with the company hunting for enough MQLs and SQLs to hit their targets, can feel like a zero-sum game. I, the prospect, give away my information and time only to find that I’m not qualified. The company comes away with my contact info, additional intelligence about the market, and a tick mark on their dashboard of qualification conversations.

But a company can’t survive on value capture alone. In a world where buyers have endless choices, companies can’t rely on features and pricing to win business, at least not over the long term. As society continues its trend toward a positive-sum orientation, the winners will build long-term positive-sum relationships with those in their orbit.

Value creation is an ideal way for companies to signal their positive-sum orientation, and actually impact people along the way. This includes connecting people through communities, training and educating people for new tasks and jobs, giving a platform to emerging voices in a field, and more.

According to game theory, positive-sum thinking leads to relationships that increase in value over time. As trust increases, transaction costs decrease, and more value is created for everyone.

I’ll admit this feels more like a meditation and less like business advice, but I think the sentiment will resonate with community-minded thinkers.

He goes on to say that infinite games

By creating value, then, companies earn the right to continue the conversations and relationships with those in their orbit. They seek to create positive-sum interactions and give value first.

And the most effective way to create value is to build high-gravity communities.

Members of a high-gravity community benefit from the connection, collaboration, and self-actualization associated with bonding over a common interest or cause. These interactions benefit the individuals involved in each relationship, but the benefits also accrue to the community overall.

In an active community, as members connect and collaborate, there will be lots of community “exhaust,” including forum conversations, community-led support discussions, ideas for the product team, attendance at events and meetups, guest speakers and writers, and often the creation of community-authored content, like tutorials and guides.

These assets allow members to teach themselves new tools and concepts, debug implementations, meet collaborators or potential hires, and generally come away from their experience with the community better informed and educated.

In this way, value creation helps companies keep the conversations going with their community, versus ending the dialogue early simply because the individual doesn’t yet have the need or budget for a paid plan. In this context, community can be considered the the new pre-sales.

As a result, we hope more companies start thinking about creating value through positive-sum relationships, which would be a net win for society.