Community Strategy Is Growth Strategy: These 2021 IPOs Prove It 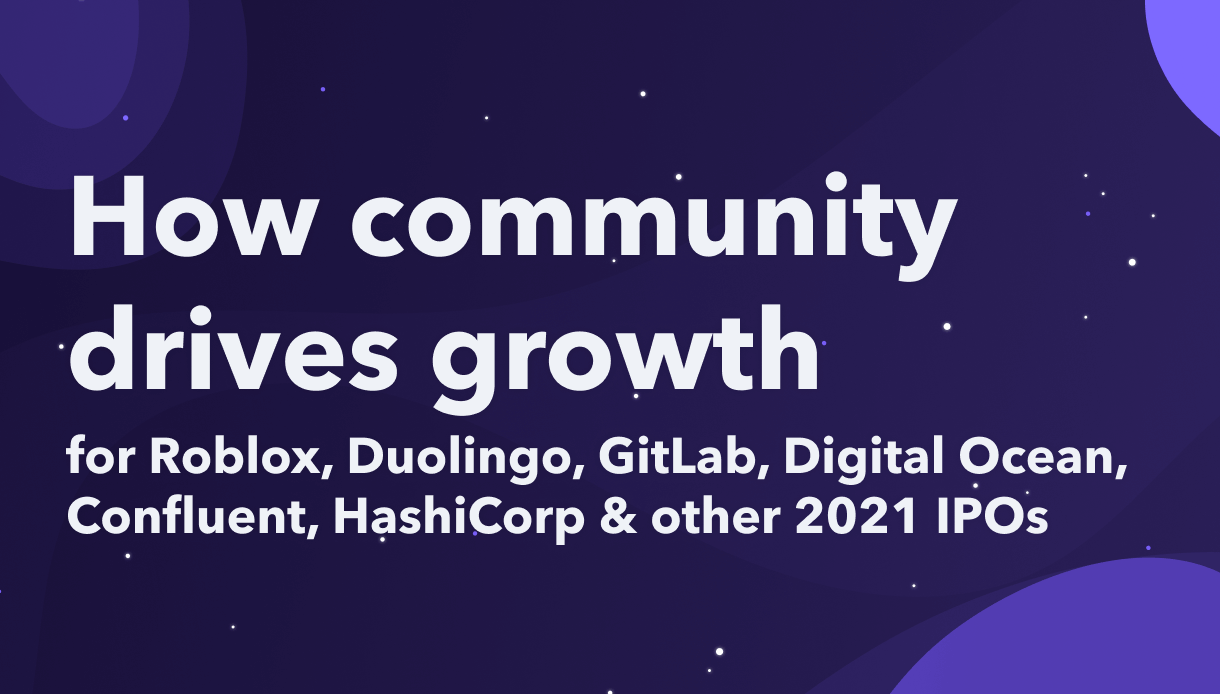 Over the past few years, community has emerged as a strategic discipline and a force-multiplier for an organization's growth efforts. 2021 saw a record-breaking number of public listings, and a common theme across tech was community as integral to business strategy as a driver of revenue and customer growth. The companies who won invested heavily in value creation, not just by being product-led, but also being community-driven in the ways they interact with users and potential customers.

Many product-led companies still focus solely on value capture and the traditional buying funnel. The need for value capture is obvious and undiminished. Through generating pipeline, qualifying, and closing prospects, it's the direct route to making money that's essential to the survival of any business. The buying funnel has been the primary framework used to optimize these activities for over a century. But the relationship between companies and customers is changing. It's not just through sales and marketing that folks decide upon products. Now it's also based on what they know and love or the recommendation of friends, colleagues, peers they know on social media, or even strangers they happen across online. They want to try before they buy, read reviews and guides created by users, and get advice from others on avoiding pitfalls. Products are no longer sold but adopted.

The tidy linear sales process is gone, and the funnel can't account for this leap in buyer behavior. After all, the funnel was pioneered when adoption, as a concept, didn't exist. Through the lens of the funnel, a person is either a lead or they're not, and the only value that person has to the company is measured by their likelihood to purchase. But prospects know this and can spot a company hungry for enough MQLs and SQLs to hit their targets a mile away. For them, it feels like a zero-sum game. They give away their information and time only to find that they're not qualified. The company comes away with contact info, additional market intelligence, and ticks marking off qualification conversations. Meanwhile, they're left with dreary drip campaign emails and creepy retargeted ads.

So if value capture brings conversations to an end, the solution then is to create value, not just capture it. By creating value, companies earn the right to continue the conversation and form relationships by building community. When done right, a community can be a means to amplify the impact of a company's product-led growth efforts, balancing an organization's value capture activities and creating positive-sum outcomes for all. A framework like the Orbit Model that’s built for the realities of managing a community can be used alongside the funnel. It provides a way to visualize and quantify a community so teams can better engage with people and optimize their practices to deliver a more valuable experience for its members and better outcomes for the business.

Sometimes community is the product. Take Roblox for example, which debuted on the NYSE in March, via direct listing. Roblox provides the infrastructure and supporting technology, but the game experience is all user-generated content built by their community of over 8 million active developers. This has enabled them to build a vast world much faster than they could have done so themselves and is a significant factor in growing and sustaining their 200M+ MAUs.

Similarly, Duolingo built a community around content creation too. They were able to scale to 90 language courses by enlisting help from volunteers in their community and extending their potential audience in the process. This has helped them drive their market cap from $5B at IPO to over $6.1B just a few months later.

WalkMe has successfully built a community of digital adoption professionals who are growing their careers based entirely on their expertise with the platform. This builds loyalty in a competitive space. While, community is a competitive moat for UIPath. Their 1.5M member strong product community brings people together to share ideas and feedback that drive new feature development and improvements. It's been so successful, they've doubled down on it, announcing in June new features for members to access a database of use cases, jobs, and mentors. In the last three years, UIPath has grown ARR from $169m to $580m, with a CAGR of 151%, making it "one of the fastest-growing and capital-efficient businesses today."

‍For GitLab, community means a way to build better products. They've adopted an open source business model, which harnesses the creative input from over 3,000 contributors. Their S-1 details how "community contributions... create a virtuous cycle where more contributions lead to more features, which leads to more users, leading back to more contributions." Unlike some companies, open source for GitLab doesn't just mean community-sourced bug fixes. Core parts of their product have been contributed by community members. For example, a member of their community contributed "a better version of the GitLab CI application so that it could run jobs in parallel," which was quickly adopted and they "made this new Runner the default version." The result of this community-driven product development is an acceleration in their ability to innovate and provide a better platform to customers.

Community can also be leveraged as a means to re-invent. Poshmark is bringing back the human connection that retail lost when it moved online by combining social features with its eCommerce platform. The Redwood City based company created a vibrant community of 70 million "Poshers" across the U.S., Canada, and Australia, and was one of 2021’s earliest tech IPOs.

Digital Ocean: Community as a differentiator

Faced with competition from tech giants like Google, Microsoft, and Amazon, Digital Ocean (March 2021 IPO) turned to community as a differentiator. They've raised community up to be a critical part of their business by making it one of its four principles for a highly differentiated experience. They nurture a community of people who contribute educational developer content like tutorials, talks, and events. This has helped them to carve out a niche, which has made it "a favorite among developers as a cost-effective and easy to deploy and manage alternative."

For some other developer-focused organizations, community is their Go-to-Market. Take Confluent, for example, which started inside LinkedIn as an open-source project. Their developer community is driven by their Catalysts advocacy program, combining a forum and Slack group alongside their global meetup program with over 60,000 members across over 200 international groups. Currently, Confluent has 2.5K customers generating $263M in revenue over the last twelve months (up 53% YoY). The company IPO’d earlier this summer.

For HashiCorp, community is a core growth engine. Their open source community of developers consists of hundreds of thousands of users, over 10,000 of whom have completed their certification program.

In their S-1 filing, they list numerous benefits that community provides them, including enabling users to "give feedback directly, report issues, contribute features, and fix bugs" and partners "to integrate their technology." This in turn, "creates a powerful network effect that drives further adoption" of their solutions and ultimately, they regard this community input as having helped them design practitioner-friendly software.

In business terms, they say that their "broad community engagement assists our go-to-market strategy by enabling technical knowledge and adoption inside our customers’ organizations." Their community members not only use but advocate for their products, which represents a powerful growth flywheel that's a highly efficient channel for demand generation. What's more, despite the maturity of their community program they still highlight community as "a significant growth opportunity" and "a sustainable competitive advantage."

The examples of this year's community-driven IPOs don't stop there. There's the Braze bonfire customer community, Udemy's instructor community, Amplitude's practitioner community, and Couchbase's dev champions community, among others. The reality is that all companies have a community around them whether they choose to engage with it or not. Robinhood is a lesson in what can happen if you don't. When you make no home for users to meet and seek support from official channels, they'll find their own.

Creating Value through Community in Your Own Business

So how do you approach balancing value capture with value creation within your own business? A good starting point is community discovery alongside a solid Go-to-Community plan, which guides you through considering how your organization can create and engage with its community, provide value to its members, and derive value for itself. Used alongside the Orbit Model they provide the rigor necessary to make community a success. Those that see community as merely an add-on to their GTM efforts will fail. But when adopted thoughtfully, community can be a unique competitive advantage that provides GTM efficiencies by creating advocates, and improving activation and retention of users, by engaging with the entire audience around a product.